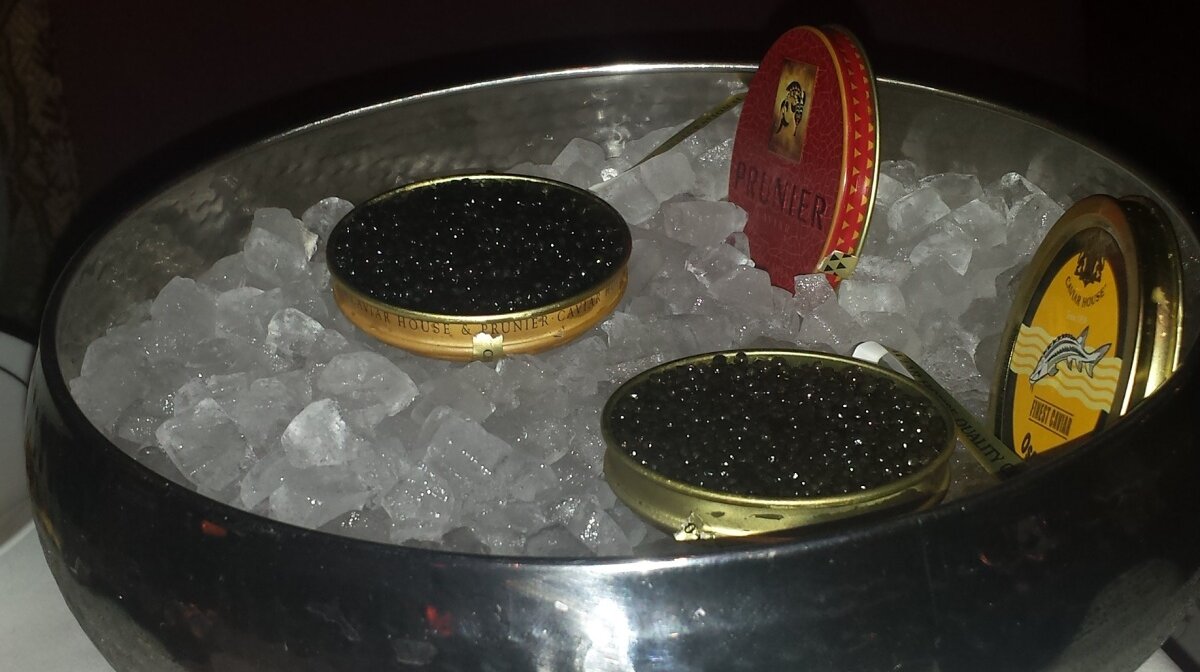 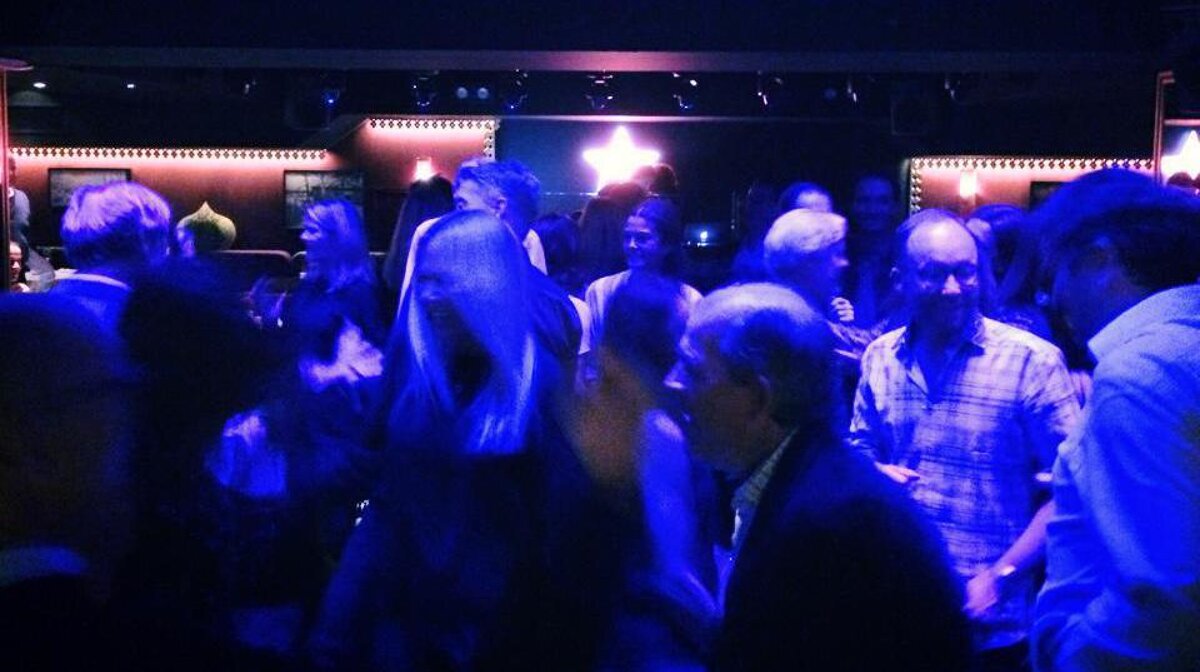 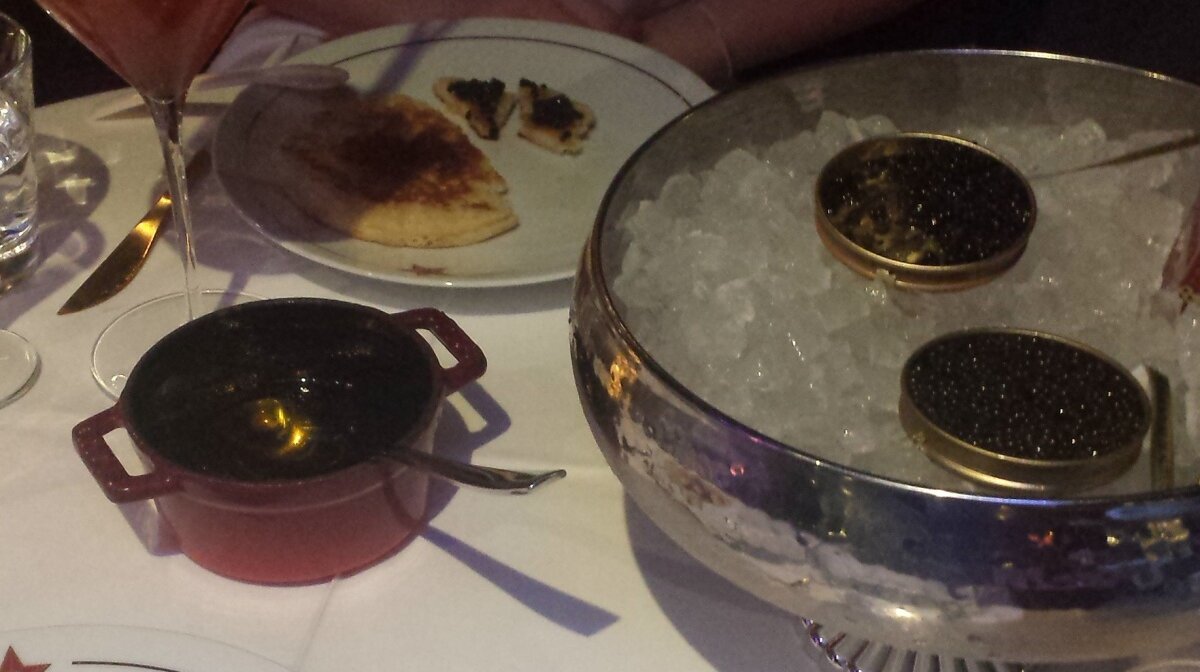 A new way of dining and partying has arrived this season with Scandinavian and Eastern European influences.

Etoile Rouge is in a class of its own for atmosphere, taste and originality. With its floral patterns and decadent red colours owning the wall space and fittings, you really feel like you have been whisked away somewhere special.

The grand entrance hall and stairs are decorated with Scandinavian portraits and the ceiling is covered with a 'Baroque' period painting from the 1600's. It oozes class and opulence. It's extravagant, but not in a way you feel uncomfortable, you feel relaxed and excited to enter the main room.

We were seated down on a cute white-clothed table and offered to try some Aqavit before we start eating, while the Live DJ (Olivier Hosts on this night) created the vibe with some oldskool soul. Aqavit is an infused spirit of spice and herbs from Scandinavia and is a fine drop before eating.

Our meal started with a varied selection of Caviar (the waiter explained in great detail how each one tasted), served with bilinis, creme fråiche and fondue butter. I know Caviar is a taste not everybody loves, but they have such a broad selection that anyone can find something they'd enjoy. It was served on a bed of crushed ice in a large silver bowl and looked fantastic. We tried the Saint James and the Oscietra. The Saint James was a stronger taste to the Oscietra, which had a saltier taste, both had a creamy texture and were eaten very quickly!

For the main event we went with 6 dishes (we were hungry). The fois gras which was pan fried and melted in your mouth. It was served with tiny chopped apples and mango chutney, such a different mix of flavours that worked really well.

The Tartar de Boeuf was smoky and rich, along with the wild mushrooms and hazelnuts it was served with. The Kamchatka Crab came detached from its shell, so it was easy to slide out and eat, and was fresh and light, accompanied by a fennel and apple salad. The St. Jaques (scallops) came with a creamy truffle sauce - the staff told me it is the most popular dish they serve and I can see why. It fell off my pearl and gold fork into my mouth with such ease...

When I saw lamb chops served as meatballs on the menu, I just had to try them and I was not disappointed. They had a herby and spicy flavour to them, definitely a new and interesting way of eating lamb chops!

Just as we finished our food, the lights got a little dimmer and the music turned up a notch. We began to see the other tables get up and start dancing, helped by a little Vodka in their system no doubt! We ordered a couple shots ourselves of Zubrovka (Polish Vodka with a blade of grass in the bottle) and got up started dancing too.

Our meal was accompanied with some fine cocktails made from head barman Johan Demarre. We had the 'Etoile Rouge' and the 'Gagarine Fizz' both of which were fruity and tasted really good. After dinner we moved onto something stronger, and went with the cocktail named after the famous Russian Author Leo Tolstoy the 'Tolstoy Swizzle' and the 'Kiss Yo Mama' which isn't named after a Famous Russian Author... Both had the right amount of kick and were shaken perfectly.

When you go out for the night, you want to feel that you are taken on a journey and for that night, I felt like I was whisked away to far away land and that it was all just dream, but then I remembered, hey, I'm going back there again tomorrow night!

Etoile Rouge know how to throw a party too. Every Tuesday they will be hosting the after party for Mardi Blah, which their sister company Le Rouge host from 8pm. Underground house/tech DJ's will be coming from all over the world to rock the night. Later on in the year, they will host other special events with the Drum Warrior and Martin Solveig, stay tuned to the events calendar to find out more.