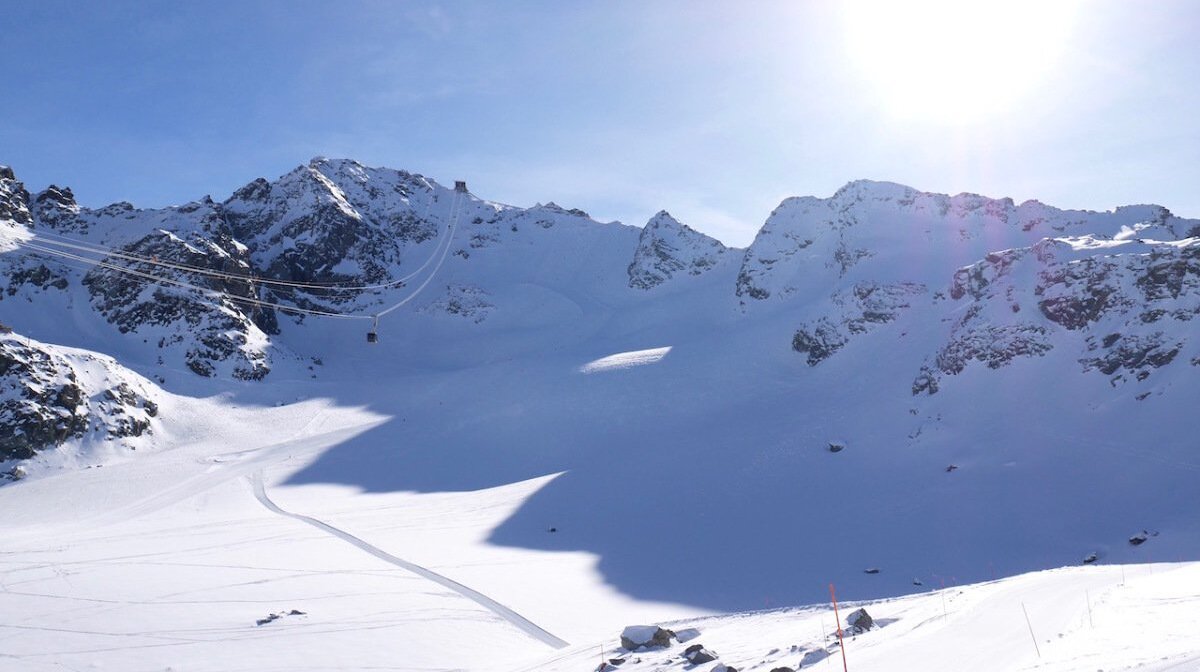 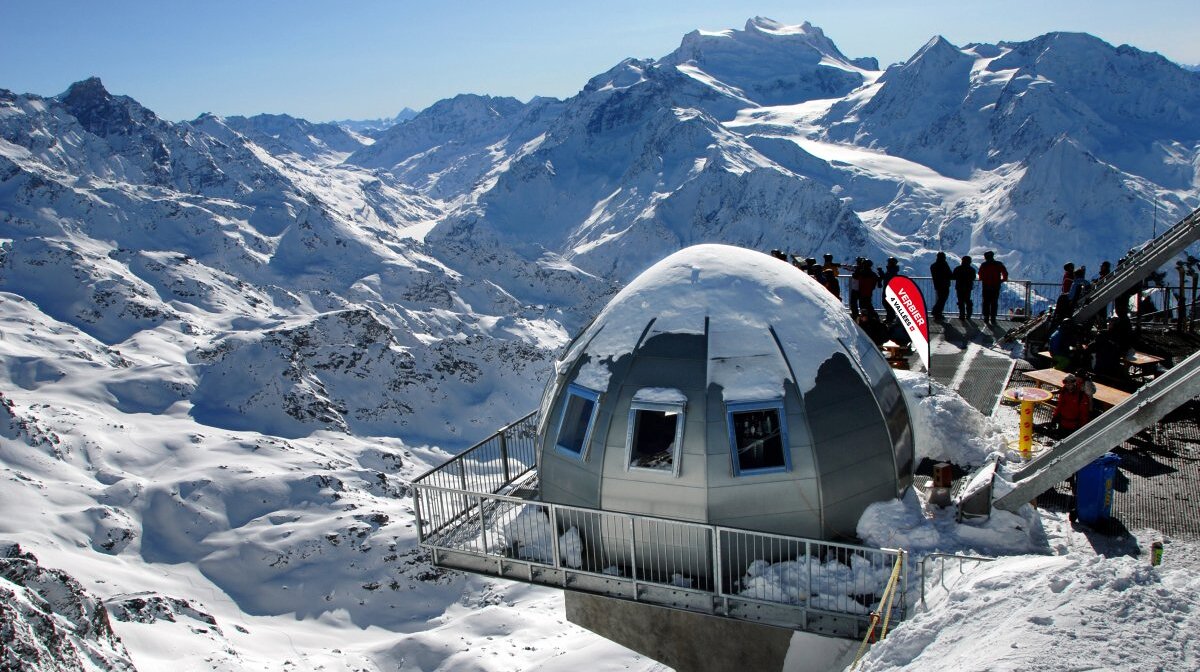 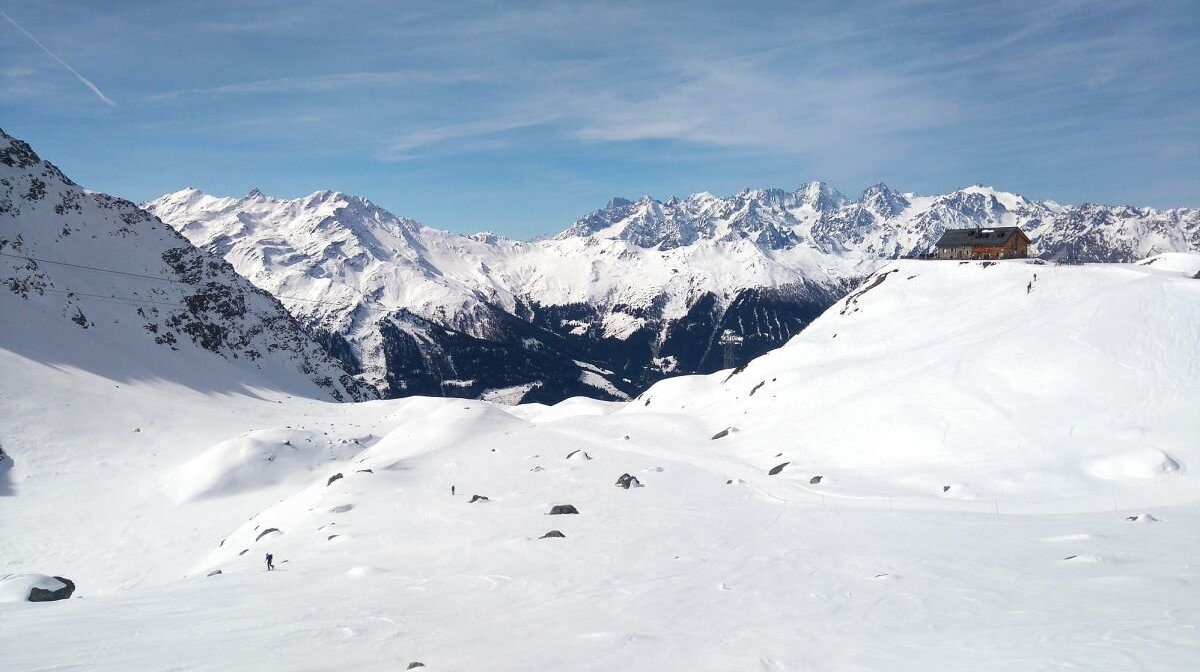 The buvette at Mont Fort

Ski tourers skinning up to Cabane Mont Fort for lunch

When combined with the Verbier sector’s Mt-Gelé and Tortin itineraries, the possibilities are simply endless (see the piste maps).

Mont Fort
Those seeking the awe-inspiring panoramic views from the top of Mont Fort, as well as the challenging and often mogulled-out black run on its front face, can head up to its 3,330m summit via the Mont Fort 2 tram. From there, you can also drop off the backside for some adrenaline packed descents (see our off-piste guide below) but it is not advisable to do so without the accompaniment of a certified mountain guide.

From the Col des Gentianes, there is also the possibility of remaining in the high alpine area and skiing the Glaciers 2 red runs, which are serviced by the Glacier 1 & Glacier 2 drag lifts. Due to the glacier’s heavy recession these past few years, this area necessitates lots of natural snowfall to operate, and therefore, is not always open.

A word of advice for all of you venturing up there: If the weather is threatening to come in and you don’t know the sector well, it is preferable to make your way down the mountain ASAP as the high alpine environment and pea-soup fog do not mix very well. The lack of trees and recognisable features can quickly give you an impression of vertigo, not to mention how easy it is to become lost amidst such a vast area. Even following the piste markers to avoid falling off the run can be a difficult task for someone who knows the slope layout well. Better to save your high alpine adventures for nice sunny days!

4 Valleys
The rest of the 4 Valleys, namely Nendaz (1400m), Siviez (1730m), Veysonnaz (1400m) and Thyon (2100m) together go by the name of “Printze”. Spanning North, North-East from Tortin, the Printze area offers a great choice of blue and red runs, as well as a few blacks for the more intrepid skiers and snowboarders.

The highest point in this sector is the Greppon Blanc, at 2700m under which you'll find a selection of red and black runs taking you either back to Siviez or traversing across the mountain to Thyon. Once in Thyon you'll find more blue pistes on the back side of the mountain, marking the farthest point in the 4 valleys ski area and you'll need to be competent skiing red pistes to get across here. 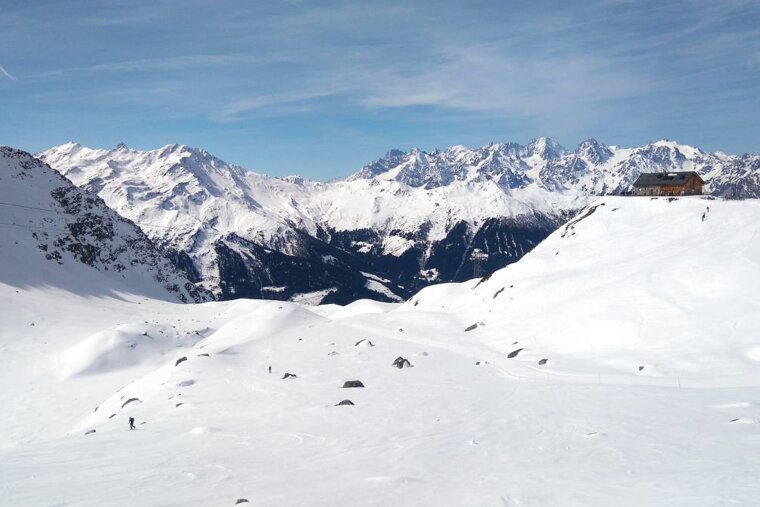 Backside Mont Fort
Probably the most awesome off-piste itinerary in the 4-Valleys, doing a “backside” means you’re really leaving the ski area boundaries & getting out there in the backcountry for a bit. The slope inclination (very steep at times), glaciated terrain, avalanche potential and relatively long walk out means only expert skiers and snowboarders with a good knowledge of avalanche awareness should attempt this run, or better yet, hire a guide to make sure you go the right way and get out safely!

Access is from the top of the Mont Fort itself. Once you reach the bottom of the tram’s staircase, duck the rope to your left & you’re at the start of your journey. From there, follow the track to the edge of the eastern bowls and drop into the first one. Here, you can either go straight down, or traverse over to the skier’s left and drop into the second bowl. Both are equally as steep, yet the 2nd one is somewhat narrower, but both lead to the same exit zone; your choice. From there, the slope mellows out as you come onto the tongue of the Petit Mont Fort Glacier. Keep your speed through this relatively flat section until you eventually wrap around to the left to tackle a new, short but moderately steep, face. Here you must again keep your speed up as you want to make it as far across the next flat zone (which is actually the frozen Grand Désert Lake). After a bit of pushing, you will reach a section of fun, rolling terrain. At the bottom of this slope, hook a left which will lead you to the start of the traverse above the Cleuson Lake. Although not technically difficult, this traverse is long and necessitates a fair bit of pushing.

When you’ve reached the dam on the lake’s other extremity, you’re on the last leg of your journey. Drop in right next to the dam and make your way down until you hit a road, which you will take to the left. Continue down on it, re-entering the forest, until minutes later, you come out onto the blue Tortin piste which leads down to the 4-man chair in Siviez. Congratulations, you’re back in the 4-Valleys lift system.

Gentianes – Tortin
Probably the easiest off-piste to reach in the entire 4-Valleys, this itinerary gets so much traffic it could be mistaken for a mogulled piste, only days after a snowfall.

From the Col de Gentianes (top of the Jumbo), make your way down towards Tortin on the red piste which makes its way to the bottom of the Glaciers 1 & 2 drag-lifts. Once there, continue past them and you are officially at the start of the Gentianes-Tortin ski itinerary. From there you have different options to make your way down the massive face’s steep sustained gradient. Going skier’s left will take you through some narrower, at times quite steep “couloir like” sections, whilst going skier’s right will take you into a much more open bowl, which can get quite full of moguls, as most people go this way. If unfamiliar with the terrain, going straight down is not recommended, as there are some cliffs to avoid which are difficult to see given the pitch. As you get lower down, every route funnels back to the same central section where speed must be maintained in order to cross the flats and rejoin with the lifts at Tortin!

Because of its northern exposure and higher altitude, the snow can hold quite well in the face, especially on the skier’s left which gets the least sun. Conversely, come springtime and its warmer temperatures, the face can be pretty “bullet-proof” in the mornings…best to wait until the afternoon to hit it.

Stairway to Heaven
Yet another classic itinerary. For the off-piste enthusiast, no trip to Verbier is complete without having carved some turns down “Stairways”…good cold winter powder can often be found right into the spring on this north-facing slope.

Take the Jumbo up to the Col de Gentianes. Make a right when you get down the lift’s stairs and follow the traverse which makes its way towards the large cliffs directly ahead. The traverse will then veer to the right to run parallel to the cliffs. Just after this, if you look up to the left, you will see a boot pack which leads up a relatively wide, steep couloir. This is the “Stairway to Heaven”…

Make your way up (remembering to keep good spacing between riders so as not to load the slope unnecessarily) until you reach the top, some 10 minutes later. Welcome to the start of your run. From here, you can drop in right away, or choose to traverse left along the bowl to get a fresher track. There are no real difficulties to speak of on this moderately sloping open bowl if you keep to the central or left-hand side portion of the glacier. Avoid going to the very right-hand side as dependent on the snowpack depth, the tongue of the glacier is sometimes exposed. To exit, merge towards the left past a hump on the right at the bottom of the face, and then follow the mellow fall-line towards the right until you join up to the lower portion of the Gentianes-Tortin itinerary. Keep your speed up as it gets really flat near the merge point and this will save you some pushing. From there, you’re only minutes away from the lifts at Tortin!

Take a look at this year's Ski Pass Prices or, if you're not sure which pass to buy, read Ski Pass Options for more information. Find your way around with Piste Maps for Verbier.